I’m hiding. It’s release day for Ring in the True, and I should be excerpting it, and promoting it, or at least dropping an email to my list. But I’m not. I’m hiding. Because, well, that feels safest.

I’ve been writing, and doing line edits for Kith and Kin (also known as Codename: DRO). But I’ve decided to take a break in order to watch a slasharific episode of Criminal Minds.

I love this show. It’s problematic in a number of ways, like all shows. But this episode is even more problematic because it’s got one of those classic DID THE INDIANS DO IT? plotlines, with a wise, angry Indian character (played by the always excellent Gregory Norman Cruz, whom you might remember from a main cast role on Saving Grace and one-off roles on basically everything else).

Fandom likes to pair Reid with everyone on this show. I love me some Gubler, but I don’t need to imagine him banging everyone. In this episode, the usual suspects share the spotlight with Cruz, who’s fantastic.

And of course, seeing as how I can queer everything, I queer the fuck out of lead man Hotch and Cruz’s character Blackwolf (yeah, baby, bring on the token First Nations names). But in my defense, if you saw these two on screen, you’d queer them too. 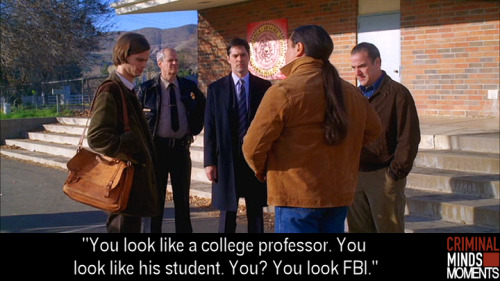 And sure, it’s totally the role of <insert Indian character here> to be intense, because this is primetime, but oh god, Cruz brings it, and when Blackwolf and Hotch are staring at each other all like “Come at me, bro” you totally want them to kiss.

Hey, fun fact brought to you by IMDB: Chad Allen, the dude who plays The Villain in this episode, was the little boy on Doctor Quinn, a show on which Cruz had a three episode recurring role.

Anyway, as I was saying, despite the incredibly problematic nature of this episode, the energy between these two actors crackles, and I live for that kind of thing. And please let me be very clear: I don’t require that people be queer to have absolutely fantastic chemistry. I don’t require characters to be queer, either (because if I did, I’d be one entertainment starved little beast). Some folks have chemistry, that’s all. Take a look at your buddy movies and you’ll know what I’m saying.

Does the white guy bust in at the end and save the brown guy? Yep. Am I annoyed by that? Oh yeah. Boring, Criminal Minds. I’m so over the white guy hero narrative. Even if Blackwolf does say, “Captain America here shot number five.” Doesn’t redeem the dumb, there, movie, but whatever.

Should you ever wonder what inspires the slash brain in those of us who have it, it looks like this: 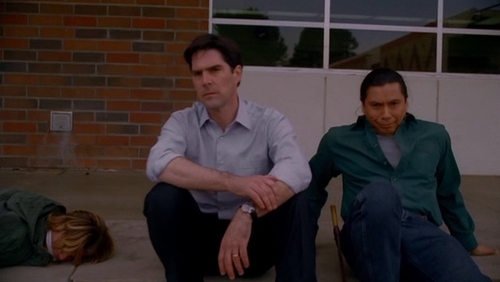 Wouldn’t you want to know what happens after this? (I’ve looked. The fanfic is thin on the ground. And largely the same level of problematic.)

Here on release day, this is what I’m doing. Watching old television shows, analyzing them, and wishing some clever fanfiction writers were writing the exact thing I need to read. Since they aren’t, I’ll now go back to writing what, hopefully, someone else needs to read.