The Red and Bad Book Club!

Holy moly, I just had an idea.

I’m three episodes into writing Red and Bad season two, and I had this thought. This idea. This…thing, in my head, with which I’m now obsessed.*

I love the idea of the serial. I was really annoyed reading The Green Mile years ago, but it had power over me. It made me want more, it made me want it now, and those of you who remember what it was like before we had social networks and blogs and other such things (those of you who remember email groups where every message got sent out to every recipient; and yes, I absolutely was a SKEMER, if you must know), will remember also that there was no easy way of talking to a group of people doing the same thing you were doing, unless you wanted to join an in-person reading group. (And those were naturally closed to teenagers reading Stephen King, and so would not have helped me anyway!)

I have a serial coming out later this spring. I wrote one last fall. I had this idea that I could serialize season two on the website, each Monday, for 24 hours, and anyone who wanted to grab it when it was up could do so, and we could chat a little about it.

And then I started thinking…hey, you know, that could be a fun thing to do over email.

And then, and then, I started thinking, y’know, it’d be cool to start with season one…

So here’s where we stand:

So it may be clear, if you hang out on the blog or interact with me in other ways, that I’m a bit uncomfortable with the idea of making money off my fiction. I mean, theoretically it’s a great plan. It’s the only plan. It’s literally the only career I’ve ever planned for. 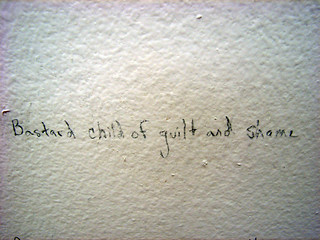 But in practice, it’s…weird. To say the least.

I also happen to be incredibly stingy, like kind of absurdly stingy. I will stress over spending $1.25 on a cup of coffee. I’ll actually feel crummy about that, like I should have figured out some way to avoid spending that buck-twenty-five. (I used to pack the French Press and a baggie of ground coffee whenever I spent the weekend with my-friend-J-who-doesn’t-drink-coffee. All to avoid that dollar expense.)

So you put Stingy Kris and Weird Relationship to Art and Commerce Kris together, and you get what I’ve been doing the last month and a half, which is not pay for the MailChimp plan that will allow me to do autoresponders.

Briefly, for those who don’t know, right now if you sign up for my list you get a “Hey, thanks for subscribing” email. I think. What you should get is a sequence of emails, beginning with a “Thanks for subscribing! Welcome to the list! Just in case you don’t know, I’ve got a couple of free books out, and blah blah something something.” Then, a few days later, you should get another email that points to a blog post or a podcast or something else that demonstrates my madness for those who can’t sense it through their electronic devices while reading my stories. (Though, let’s be clear, it’s not like I’m hiding the crazy. The freak flag never comes down ’round here, m’ducks!) 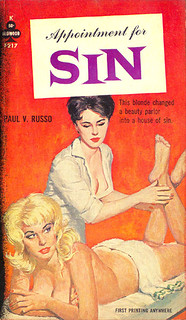 I have absolutely no reason to include this, except that it makes me happy. If I had a collection, it would so be lesbian pulps. Appointment for Sin by marsmettt tallahassee on Flickr

One of the things I’m doing with website design lately is trying to attract more folks to my email list. This is important mainly because email’s kind of a hot way to communicate, and every damn time I send out an email to the list someone on it hits “reply” and talks to me, which I fucking adore. I can tell I’m selling books by looking at my reports, but it’s so freaking awesome to get an email that’s like, “Can’t wait for the next Scientific Method story. I was reading The Honeymoon while my kid was at football practice, and it made me wish practice was longer!”

That interaction makes this so much more fun, y’all.

Also, all the advice says that having a lot of folks on a list is a really good way to launch new releases, which sounds very clever in theory, and I look forward to testing it, someday when I’m a lot more clever about this kind of thing myself.

In short: I should be doing a better job of communicating. Not a daily job of badgering you, but at least a basic attempt at establishing a relationship with folks who’ve already expressed an interest in receiving my emails.

But–BUT–what it feels like is this thing that some people might take as BUY MY BOOK BUY MY BOOK BUY MY NEW BOOK LOOK I DONE WROTE ANOTHER ONE! And even though that’s not how I write my emails, that’s the place my brain goes with it, like a jerk.

Enter: instead of announcing things to buy, why don’t I give some stuff away?

I fucking love giving stuff away. So this works for me on two levels: 1) I get to test out some of this marketing stuff; and 2) I get to give some stuff away and hopefully build community while doing it. Win!