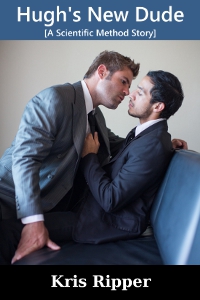 Always eat dinner at the restaurant on Friday. No sex in the library. No cuddling (okay, unless it’s with Will). Hugh Reynolds lives by certain rules. Surely the most obvious rule of all is: Don’t fall in love. It’s not a rule Hugh has trouble keeping. At least, not until he meets Truman Jennings.

Truman’s funny, and sharp, and cracks jokes about Lord Peter Wimsey. (Mom used to read Dorothy L. Sayers to Hugh when he was a kid, long before he could understand them. There’s still an entire section of the library devoted to Lord Peter.) Truman’s also good in bed, unquestionably, even if he is totally and completely vanilla. But Hugh doesn’t fall in love with people, so that can’t possibly be what this is, this annoying ever-present sensation of free fall.

Hugh maintains a pretense of not being in love (kind of) all the way up until Will visits for the weekend. But Will won’t let him get away with pretending he’s not in deep. And it turns out Truman might not be as vanilla as he thought.

The list price for this one will be $2.99, but newsletter subscribers will get a half-off coupon at Smashwords. So look for that in your inbox, folks! What’s that? You aren’t subscribed? Sign up now!