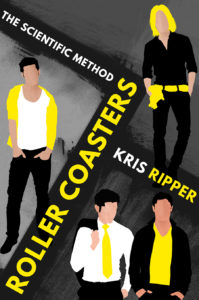 Life may be full of ups and downs, but the ride will make you scream. And laugh. And cry. Sometimes all at once.

It’s been nine months since Will and his ex broke up. Nine long months. Will doesn’t date. Will actually likes commitment. It’s just not what he wants right now. That’s when he meets Davey.

Davey isn’t like anyone Will’s ever known. He’s genderqueer, and even more of a relationship novice than Will. Will loves hanging out with him, and the sex is new and wild and so freaking hot. He wants everyone to be as excited about this relationship as he is, but nothing’s ever that simple. Especially when he gets his (fake) boyfriends involved.

Truman’s diplomatic and amused, but Hugh? There’s a whole lot Hugh isn’t saying, and only some of it is about how possessive he feels when he’s not allowed to put his hands all over Will.

Dating Davey has been a whole lot more than Will bargained for, but he’s loving the ride. Then the bottom drops out and he slams back to the ground all over again. And this time he’s not the only one who needs help putting the pieces back together.