The Spinner, the Shepherd, and the Leading Man 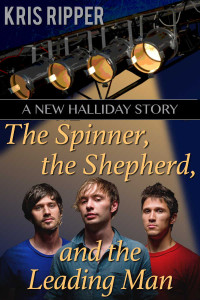 Frazier Lane has wanted his roommate since the day they met—eight years ago. When Dom gets them jobs running a summer stock program in the sticks, Fraz thinks the time has come. He’ll kiss Dom, Dom will realize they’re meant to be, and they’ll live happily ever after.

That’s how it’s supposed to go, anyway. Until they meet Pete.

Pete’s a wild card. He knows nothing about theater, is totally in the closet, and is one of the nicest guys Fraz has ever met. Unfortunately, Dom seems to think so, too.

Fraz decides he’ll take one for the team and help Dom coax Pete out of the closet and into the light, even if it breaks his heart, but Dom and Pete have other ideas.

Three plays, ten weeks in Yurtville, not enough cigarettes, and way too many kids who think the local summer stock is Broadway. All Fraz wants is the leading man, but he might just get the shepherd, too.

If you dig this story, you may also enjoy the Frazier POV Scientific Method Universe crossover “Frazier Learns His Place”, which is free on the blog: https://krisripper.com/blog/frazier-learns-his-place-nsfw/ (Hat tip to Amy Jo Cousins for linking the two stories in my brain, because I’m very freakin’ dense.)