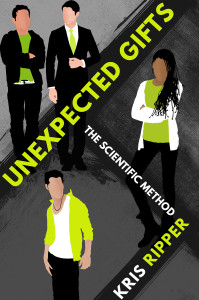 Will Derrie is not dating his friend Molly. At all. They’re just fighting about Star Trek and screwing a lot.

They should be perfect together. She loves the gay couple with whom he still shares sex and whips, and when Will finally confesses he’d rather be spanked than seduced, Molly’s a domination savant. She says gorgeous, filthy things, in just the right tone.

So why can’t Will get into it? Maybe it’s just easier to give up and accept that the best sex he’ll ever have is with a gay dom who has his own romance to deal with. It seems depressing but probably true, until said gay dom smacks him around a bit and convinces him that the potential rewards of communicating honestly with Molly are worth the risk.